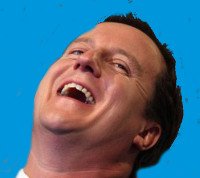 You know, since I started my SEO experiment of the Labour party to get them ranking for “Champagne Socialists” in Google, it’s been suggested to me that I am being unfair in that I’m focusing on one party and not the other.

Even though I despise Labour the most, since they are the most hypocritical of them all, i.e. they claim to be representing the working man from their multi million pound mansions, I have to say that the Tories are little better, if indeed they are any better at all.

Therefore I have decided to stick 2 fingers up to them as well, and to get their website ranking in Google for something that epitomizes them too.

I have to say I’ve found it tougher to think of a phrase that encapsulates them quite so well as “champagne socialists” does for labour, but then I thought about it and came to the conclusion that they’re a bunch of toffee nosed twits, and so this is the phrase I’ve chosen for them.

Even better will be if I can get them both to 1st place for their respective phrases.

They are pretty equally bad and I’d like to stick 2 fingers up to them equally, so here’s hoping and fingers crossed.