Is Googles Penguin Update all it’s cracked up to be? 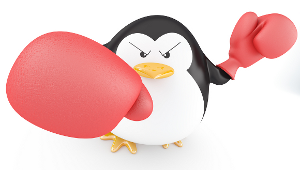 Google have last week launched their new supposedly improved Penguin update to tackle web spam, but we’re asking whether the new update really all it’s cracked up to be?

When Google launched the original Penguin algorithm change back in April 2012 there was chaos in the webmaster web world, with sites that had good content, lots of happy visitors, and had held good rankings for a long time consigned to the depths of the internet.

There was uproar on many sites with webmaster perplexed as to quite why their site had been penalised, and no obvious way to recover from the penalty.

As we know now the original Penguin update seemed to be tackling backlinks and more specifically backlinking practices that Google now deemed to be “bad practice” and worthy of a substantial penalisation.

While the dust hasn’t quite settled on this current Penguin update we’ve spent some time looking at sites that have been effected, and trying to make sense of the logic (if there is any) in the changes.

At this present time it looks as though the results still need to settle, or at least lets hope that they do because there is the same prevalence of Twitter, Pinterest, WordPress, and Blogspot junk proliferating the page 1 spots for many searches as last time, and this time around we’ve noticed a couple of other annoyances as well.

One of these is the situation where you conduct a search and you get maybe a Wikipedia page on page 1, along with 9 results all coming from different pages of the same website.

It would seem to be ludicrous to suggest that one site can have 9 different pages that are more relevant for a given search term than anything else on the web, particularly in the main case we’ve noted where the site in question ranks for a phrase that just happens to be it’s company name, and is also contained in the domain name.

To give you an example of what we mean (we can’t give you the exact search term since it relates to a clients site), it is the equivalent of if you searched for “orange paint” (presumably because you are looking to buy some orange paint), and 9 of the results on page 1 of Google belong to the fictitious “Orange Paint Media”, a company that specialises in Social Media campaigns.

I think that most people would agree that these results would not show people what they are actually looking for, since all but a very small fraction of those who performed the search would be looking for a product by name, rather than a brand that contains the product name.

This seems to be a strong signal that Google are focusing a lot more on brand identities than just simply keywords, but while it may be the way that Google want the web to go, it is sadly not the way that ordinary people use the web, and the net result has to be a lower level of satisfaction in the returned results for the user.

Another oddity that we have observed is the prevalence of domains showing in the results that have a strong match for the keywords searched for, in other words they are an exact match domain, or the domains contain the keywords or a large proportion of them, plus an extra word.

This would seem to fly in the face of the EMD algorithm change that Google rolled out a few months ago.

In the same niche as the “orange paint” example above, we have 2 websites.

The first is a good quality site, totally unique content, not over optimised, hardly any backlinks, and these have a diverse anchor text.

This site was getting 400 visitors per day with a bounce rate of around 50% (the main keywords that match the focus of the site were at around 35%), which isn’t overly bad.

In the few days since the Google update traffic has dropped by 90%, with people now finding the site through longer tailed or more obscure searches, and the bounce rate has increased to almost 70%.

This metric should give a strong indicator to whether the update is presenting people with the sites they want to see for any given search.

The second site is, quite frankly, rubbish.

It consists of just 3 pages – the home page, a contact page, and a links page. It has even fewer backlinks to it (16) than the first site, again with a mix of anchor text.

The bulk of the content comes from the home page, and consists of 3 paragraphs saying “welcome to this orange paint site” and then a vague explanation of what the site is about.

It offers absolutely no useful content whatsoever, it’s sole purpose was to provide links to the first site for experimental purposes.

It might come as some surprise then to know that for the search that matches the domain (i.e. making it an EMD), it has shot from nowhere to the top of page 2, while the useful site has dropped back to almost page 4.

It is difficult to draw any meaningful conclusions yet from this update, but it looks like 2 things may be starting to become clear:

It will be interesting to see how the results look after the dust has settled, but at this moment in time we can’t help but feel that Google are changing the algorithm to present their interpretation of how results should look, rather than how users want the results to look, which can’t really make the update an unqualified success for webmaster, users, or indeed Google themselves.

Except that they might see an upsurge in Adwords spend of course.

This website uses cookies to improve your experience while you navigate through the website. Out of these, the cookies that are categorized as necessary are stored on your browser as they are essential for the working of basic functionalities of the website. We also use third-party cookies that help us analyze and understand how you use this website. These cookies will be stored in your browser only with your consent. You also have the option to opt-out of these cookies. But opting out of some of these cookies may affect your browsing experience.
Necessary Always Enabled

Any cookies that may not be particularly necessary for the website to function and is used specifically to collect user personal data via analytics, ads, other embedded contents are termed as non-necessary cookies. It is mandatory to procure user consent prior to running these cookies on your website.